By BigRedJellyMarch 2, 2021Leadership, People
No Comments 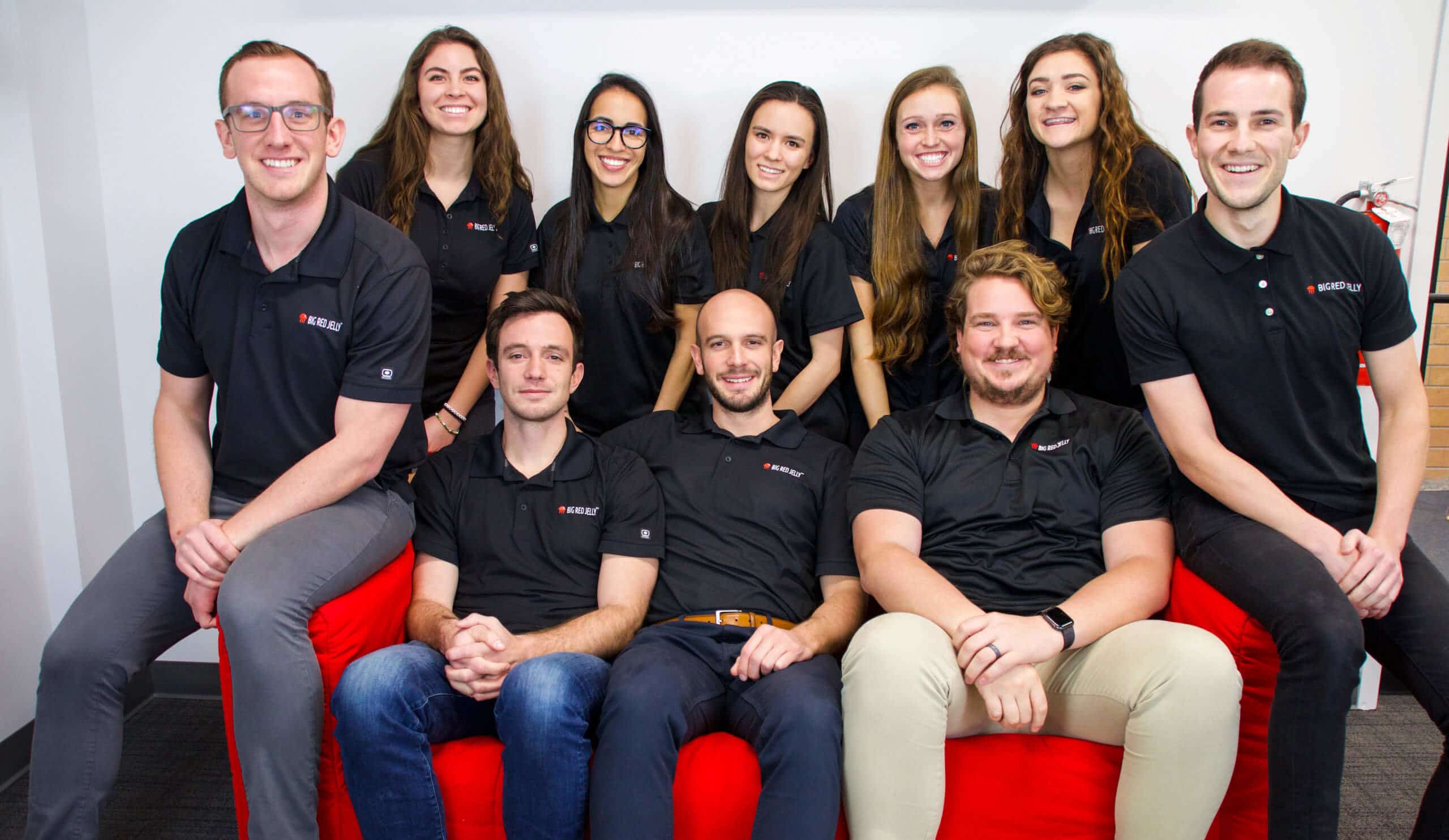 Be More Proactive and Efficient

This is one of the Big Red Jelly values. This gives you a little glimpse into the culture
and the internal workings of Big Red Jelly and our team here: Be proactive and efficient.
Let me read the definition of proactive: “Creating or controlling a situation by causing
something to happen rather than responding to it after it has happened. After reading
this phrase, I know for a fact so many of you small business owners out there think,
yeah, that’s definitely true. If everyone on a team made the commitment to be more
proactive, think about how much more you would get done. Think about how fast the
fires get put out. Think about how many problems would be solved quickly. Think about
how many problems would never appear because you’re being proactive and planning
on the problem.
There’s always an opportunity to be more proactive than you would think. A lot of
times we have team meetings, a lot of times that are action items that are discussed.
And you’ll see that someone is not taking notes. Or you might look at someone and say,
hey, I really need you to do this by 4:00 p.m. today. They look at you, they give you that
blank stare. They say, “Yeah, got it.” And you think, are you sure you got it? Are they
being proactive instead of reactive? That’s a big difference between the two classes of
people. To be honest with you, there’s always going to be the reactive type. They’re
checking the boxes that are already there. They’re responding to situations. They’re
answering emails that are coming into their inbox. That’s good. We need that. But the
next step is being proactive.
Here’s the definition of efficient: “Achieving maximum productivity with minimum wasted
effort or expense.” Imagine if all your team members were both proactive and efficient.
The reason why I say efficient is because at the end of the day, if you’re an efficient
team member, if you’re an efficient professional, if you’re someone who’s looking for a
job, and you can prove in an interview that you are efficient or in an internship that you
are efficient, you get the job done, you get done correctly and you get it done quickly
and efficiently with minimal wasted effort, both on your time and the rest of the team.
Right. If there’s less friction, then you are improving or increasing the bottom line for that
business. That’s just the end goal. Be proactive. Be efficient. Those are two great adjectives. Maybe in your next one-to-one with the team member to say, hey, how
efficient or proactive do you think you’ve been this past quarter? Can you give me some
examples of when you were proactive when you were efficient? What do those words
mean to you? Great questions to ask.

Get Good at Something

I know that’s poor English, but it’s important. It’s becoming more and more apparent that
in order for you to get an effective job or be able to participate efficiently and proactively
in a serious business, you’ve got to be good at something. That means a technical skill.
If you’re in construction, you’ve got to be able to build that thing. You’ve got to be able to
make that cabinet if you’re going into a cabinetry business. We need more employees,
team members, participants, citizens, who can do what they preach, who can walk the
walk before they talk the talk.
There are several examples that could be used here. At Big Red Jelly, team members
who were doing a certain thing for years, we pivoted their role or responsibility slightly
and they picked it up like that. We saw the passion align with that skill and they enjoyed
learning about it and it just took them to a whole other level. We are convinced that old
dogs can learn new tricks and you have to be good at something. You don’t have to be
the best web developer. You have to be the best coder. You don’t have to be the best IT
technician, but you have to be good at it and you have to have a solid, fundamental
understanding of that thing. Even if you are in a higher leadership position, challenge
yourself to make that part of your weekly, monthly, or quarterly learning process to go
back to the basics and see what’s happening.
For example, I run Big Red Jelly, and it would be easy to focus on big picture stuff or
have client calls from 9:00 a.m. till 5:00 PM, but to always be working on specific client
projects, both in the branding and the building and the growth is important. It always
keeps my tools sharp. I continue to learn new things, and especially in our industry
where things are changing all the time. I have to be on my toes and learning what the
latest plugins are. The latest software is with the latest updates are the latest design
trends. Now, how to apply this to incoming Big Red Jelly team members. Let’s think about the
resume. There’s a couple of things that will instantly jump out. Is it important that you’ve
got a degree? Yes, to a certain extent. That might help get an interview. I’m not saying
to drop out of school, but I’m also not saying that that’s the end all be all.
If they had at the top of their resume that they were Google Analytics certified, that they
were HubSpot inbound marketing certified, that they’d gone through and completed the
Facebook blueprint ads, online courses, if they went to a boot camp like Dev Mountain,
for example, that’s an instant qualification for me. That’s almost going to guarantee a
video interview unless something else in the resume, like just removes that positive
quality like as a minus one. That’s going to tell me some very important things about
these people. Those are real platforms that are used every day that are super important
in our industry. For you to say that you’re certified in that, it means that you know how to
use it, at least the fundamentals. That’s a huge bonus. There are tons of great affordable
boot camps out there. There’s a big movement to get back into trade schools. There are
great certifications that are free, such as HubSpot certifications, Google Analytics, and
Facebook ads.
In a recent episode of “The All In Pod”, they stated that coding and software
development will become the new blue-collar job. That will be the new engineering job,
the construction, the development job, and it makes total sense. We need to need to
wipe away these misconceptions that that’s a certain type of job. It’s something that
requires learning and skill.

Avoid Semantic Satiation and Phrases like “I’m waiting on a client to respond”, “Let’s Circle Back”, “Let’s Put a Pin in it”

Semantic satiation is a psychological phenomenon in which repetition causes a word or
phrase to temporarily lose meaning for the listener who then perceives the speech as
repeated meaningless sounds, extended inspection, or analysis. Staring at the word or
phrase for a lengthy period of time in place of repetition also produces the same effect.
You’re already thinking, yes, I’ve experienced this. If a printed word is looked at steadily
for some little time, it will be found to take on a curiously strange and foreign aspect. This loss of familiarity in its appearance sometimes makes it look like a word in another
language. We sometimes proceed further until the word is a mere collection of letters
and occasionally reaches the extreme where the letters themselves look like
meaningless marks on the paper.
Take the word flower, for example. The flower in the field. The flower in the grass.
Flower, flower, flower, flower, flower, flower, flower, flower, flower. Keep reading it.
Over time it starts to lose meaning. We start to think what does that word even is not
even a word. What is that sound? What is that combination of sounds? This is
what’s called semantic satiation.
There are some phrases and words here at Big Red Jelly that are abolished.
Sometimes they will pop up every once in a while and we have to shoot them down. We
have to abolish them to remind whoever uttered those words that they are no longer
allowed. We send them away. Some of these phrases or words are, for example, and
many of you have heard these:
“I’m waiting on…”
“They haven’t got back to me.”
“Let’s circle back around to it.”
“Let’s put a pin in it” (One of my personal favorites).
“Let’s add this to the notes and talk later.”
Since we used to hear them so much at Big Red Jelly, they lost all meaning. And to any
serious business owner, they should lose meaning to you too. They don’t mean
anything. That’s not proactive. That’s not even reactive. No more semantic satiation with
these phrases. This small principle, even though it’s vocabulary, it can be applied to other areas. Don’t just do things because that’s the status quo.
So to sum everything up, be proactive and efficient, get good at something, and avoid
semantic satiation. Don’t be putting pins into anything for the rest of your professional
lives. That’s our challenge to you.
Next Post